Skip to Search Skip to Main Content Skip to Footer

*Current hours are always located on the home page. Hours are subject to change during school closures, school and holiday breaks, and midterm / finals.

The John J. Wright Library is a state-of-the-art facility on campus, with a collection of more than 32,690 print volumes, 414,183 electronic books (all through Ebook databases), 33 subscription electronic databases, and 133 print periodical subscriptions (27 are current).

As a member of the Pennsylvania Academic Library Consortium, Inc., the library also offers Interlibrary Loan and EZ-Borrow services. Housed within the building is the Providence World Café, where students enjoy the comfortable setting of a local coffee house. The library also has sections of The Saint John's Bible on display for viewing. Click here to learn more information about The Saint John's Bible.

The Library houses a variety of instructional services and functions as an information center at La Roche University. Students performing research have access to reference materials in varied formats, as well as personal assistance from the library staff. Librarians are here to assist with research via appointment and conduct library instruction sessions for all courses.

The Library is also a Regional Federal Depository with access to Government documents located on our Database page.

John J. Wright Library, the first building constructed by the college, opened in August of 1967. Designed by Casimir J. Pellegrini Associates, the $1,000,000 library was designed to hold 80,000 volumes, have private study areas, a rare book room, and classrooms. La Roche received a grant of $333,792 under the Higher Educational Facilities Act of 1963 to construct the building. Groundbreaking ceremonies occurred on May 24, 1966. The library was named in honor of Bishop John J. Wright, an early supporter and lifelong friend of La Roche. Bishop Wright also had a strong devotion to libraries. Speaking at a Catholic Press Month luncheon in 1960, he was quoted as saying  that he valued his library card as “a symbol which entitles me to the best things in the world, next to the Faith itself.”1 On August 30, 1967, over 200 sisters, students, and volunteers made a human chain to move the books from the La Roche Library that was located in Providence Heights to the new library on campus. Dedication of the library took place November 25, 1967, with Bishop Wright officiating.

In 1974, Congressman John Heinz sponsored a bill designating the John J. Wright Library as a depository library for free government publications. As a participant in the Federal Depository Library Program, the library is open to the public. In the spring of 2010, Wright Library underwent a $1.65 million dollar renovation. Technology and resources were upgraded along with aestetic improvements for the convenience and comfort of library staff and patrons.

John J. Wright Library celebrated its 50th Anniversary of serving La Roche and the community in November of 2018.

John J. Wright Library’s purpose is collecting, preserving, and providing access to the best scholarly and educational resources; providing high quality, innovative services; and creating a welcoming and comfortable physical environment to those we serve. 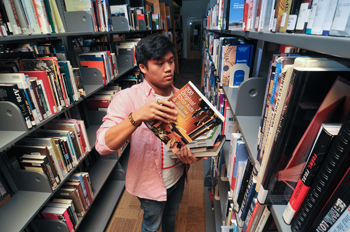 John J. Wright Library is always looking for skilled student workers who are technologically savvy, self-driven, reliable, and able to work independently as well as in a team environment. Library student jobs are part-time and hours can be scheduled between classes, in the mornings, nights, and weekends in convenient increments.

Some of the duties of a library work-study student:

What changes do you want to see in the library? Do you have any specific library materials for recommendation (books, databases, magazines, games, etc.)? Do you want to check out more than just books? How are we doing? Let us know!! All comments, suggestions, and recommendations go to Alecia Kerr, Library Director. We look forward to hearing from you.

Tell Us What You Think